Glyphosate, the active ingredient in Monsanto Co.’s weed killer Roundup, is the most used agricultural chemical in the history of the planet. A staggering 9.4 million tons have been sprayed on crops all around the world. It’s also used in home gardens, national and state parks, and along roads and highways.  Roundup made Monsanto $4.8 billion in revenue in 2015.

Monsanto insists that glyphosate is safe. Yet a consolidated lawsuit brought on behalf of dozens of plaintiffs from around the United States alleges that Monsanto’s Roundup caused their cancer. The plaintiffs assert that Monsanto knew glyphosate was capable of harm, but did nothing to warn the public. One suit filed by 64-year-old Judi Fitzgerald in New York court claims:

Monsanto assured the public that Roundup was harmless. In order to prove this, Monsanto championed falsified data and attacked legitimate studies that revealed its dangers. Monsanto led a prolonged campaign of misinformation to convince government agencies, farmers and the general population that Roundup was safe.

DOES GLYPHOSATE CAUSE CANCER?
The central question in the case against Monsanto is whether glyphosate is capable of causing cancer, and if it is, did the plaintiffs get it from using Roundup. Scott Partridge, Monsanto’s Vice President of Global Strategy, says absolutely not.

While we empathize with anyone facing these terrible illnesses, there is no evidence that glyphosate is the cause. The very long and well-established history of safe glyphosate use–over 40 years in more than 160 countries–shows clearly that these claims are supported neither by the science nor the facts.

DID THE EPA COLLUDE WITH MONSANTO?
The plaintiffs’ attorneys allege in a court filing that senior officials in the U.S. EPA (Environmental Protection Agency) may have colluded with Monsanto to keep the health risks a secret from the American public. A letter from a 30-year career EPA scientist could prove to be a critical piece of evidence in their case against Monsanto.

Dr. Marion Copley was a senior toxicologist in the EPA’s Health Effects Division. She worked closely with Jess Rowland, a top ranking official in charge of assessing glyphosate’s cancer risk for the EPA.

Copley was diagnosed with terminal cancer and stopped working for the EPA in 2012. After she left, she wrote a letter (dated March 4, 2013) to Rowland detailing fourteen health effects associated with glyphosate.

Any one of these mechanisms alone listed can cause tumors, but glyphosate causes all of them simultaneously.

The EPA had classified glyphosate as a “probable human carcinogen” in the past and Copley wanted that classification reinstated.

It is essentially certain that glyphosate causes cancer.

. . . play your political conniving games with the science to favor the registrants [pesticide manufacturers like Monsanto].

Copley alleges that Rowland and a current staff member at the EPA, Anna Lowit, “intimidated staff on CARC [Cancer Assessment Review Committee Report] and changed final reports to favor industry.” Copley says in her letter that  “If anyone in OPP [Office of Pesticide Programs] is taking bribes, it is her [Lowit].”

She urged Rowland to “for once do the right thing and don’t make decisions based on how it affects your bonus.”

I have cancer and I don’t want these serious issues in HED [Health Effects Division] to go unaddressed before I go to my grave.

Copley died from breast cancer at the age of 66 in January 2014. Rowland retired from the EPA last year. 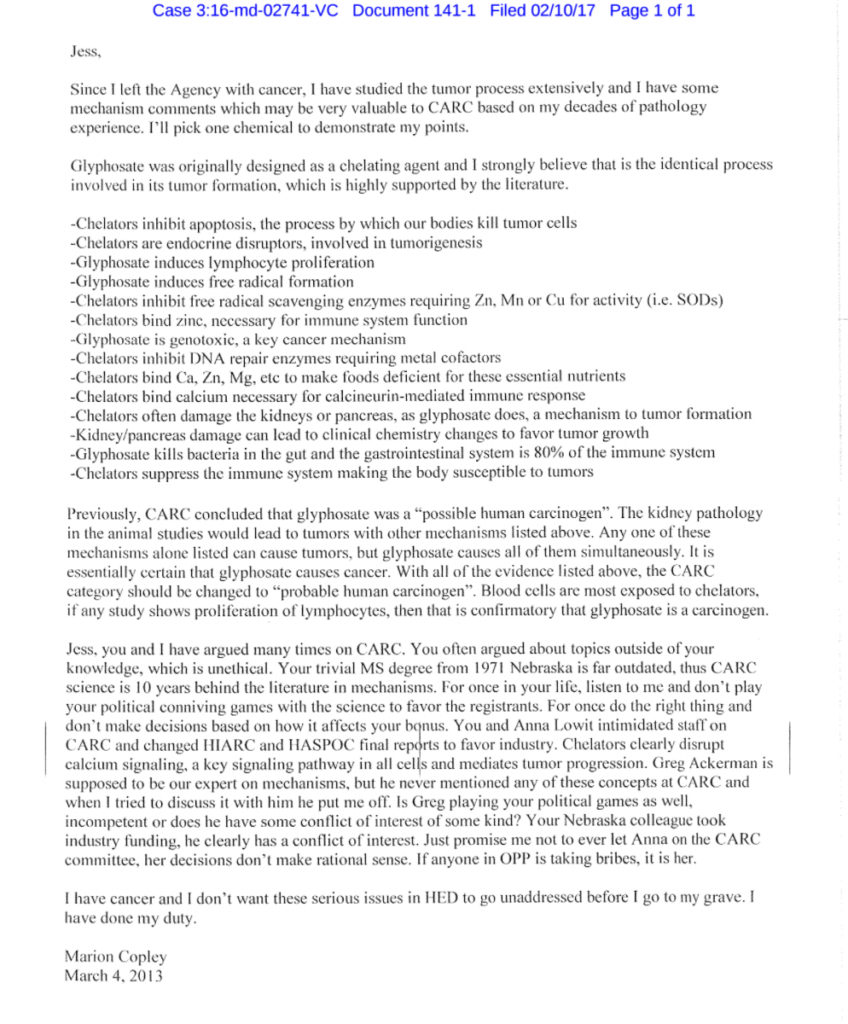 WHAT WAS ROWLAND’S RELATIONSHIP
WITH MONSANTO?
The plaintiffs’ attorneys have urged U.S. District Judge Vince Chhabria of the Northern District of California, to depose Rowland in an effort to better understand his relationship with Monsanto and to what extent, if any, it had on EPA policy regarding glyphosate. The judge seems likely to grant their request.

MONSANTO WANTS SENSITIVE DOCUMENTS KEPT FROM PUBLIC VIEW
Monsanto wants some of the documents it’s submitting to the court to stay private, or under seal, but Judge Chhabria said he will not grant that request and went so far as to threaten to impose sanctions if Monsanto continues to try and keep documents from pubic view.

EPA’S RISK ASSESSMENT FOR GLYPHOSATE
The EPA’s alleged close connection with Monsanto and reliance on industry funded studies prompted U.S. Rep. Ted Lieu (D-CA) to write a letter to EPA officials last year requesting that they meet with independent scientists to determine what, if any, health risks are associated with glyphosate. The EPA’s risk assessment for glyphosate is expected this year.

HOW MUCH GLYPHOSATE IS ON OUR FOOD?
The EPA sets allowable limits for glyphosate residues on food, but the FDA (Food and Drug Administration) has never tested to determine whether those limits have been reached or exceeded. When  the U.S. Government Accountability Office publicly criticized the agency for failing to do so last year, the FDA launched a “special assignment” to analyze glyphosate residues on a few foods. The testing was recently stopped due to problems with equipment and disagreements within the agency over testing methods.

But independent tests done by Anresco Laboratories, an FDA registered lab and reported in “Glyphosate: Unsafe on Any Plate“ from Food Democracy Now! and the Detox Project, found very high levels of glyphosate on Cheerios, Doritos, Oreos, Goldfish, Ritz Crackers, and other popular foods.Cheerios residues were 1,125.3 ppb (parts per billion); Kellogg’s Frosted Flakes levels were at 72.8 ppb; Oreo Original’s were 289.47 ppb; Lay’s Kettle Cooked Original potato chips had levels at 452.71 ppb. Whole Foods 365 Organic Golden Round Crackers had glyphosate levels at 119.12 ppb. The report noted that glyphosate has shown damaging effects in rats at 0.05 parts per billion.

Glyphosate is most heavily used on GMO crops such as corn, soy, and sugar beets. The FDA had been testing those foods as well as wheat, barley, rice, yellow and organic white popcorn before the assignment was stopped. It’s unclear when, or if, testing will resume.

BACKGROUND: GLYPHOSATE & THE CANCER DEBATE
The International Agency for Research on Cancer (IARC), a division of the World Health Organization (WHO) classified glyphosate “a  probable human carcinogen” capable of causing non-Hodgkin’s lymphoma (NHL), a rare form of cancer, in 2015. All of the plaintiffs in the case against Monsanto have non-Hodgkin’s lymphoma or have lost a loved one to the disease.

Monsanto “strongly disagrees” that Roundup causes cancer and says the IARC’s determination is “inconsistent with decades of ongoing comprehensive safety assessments” and claims “relevant, scientific data was excluded from review.” The IARC did not rely on industry funded studies to make its determination, which is a point of contention for Monsanto.

Donna Farmer, a scientist with Monsanto, studied glyphosate for more than 20 years. She told CBS News:

I can tell you glyphosate is safe. The data that they look at, they cherry pick it and then they interpret the studies completely different [sic] than research [sic] who actually did it.

Nearly 100 “independent academic and governmental scientists from around the world” sent an “Open letter: Review of the Carcinogenicity of Glyphosate by EFSA and BfR” to the Commissioner Health & Food Safety, European Commission on November 27, 2015.  Their conclusion:

[I]t is reasonable to conclude that glyphosate formulations should also be considered probable human carcinogens. We believe that the IARC WG [International Agency for Research on Cancer’s Working Group] evaluation of probably carcinogenic to humans accurately reflects the results of published scientific literature on glyphosate.

GLYPHOSATE COULD CAUSE OTHER HEALTH PROBLEMS
A peer-reviewed study led by Dr. Michael Antoniou, a scientist at King’s College London and published this year in Scientific Reports, an online journal from the publishers of Nature, has shown that low doses of the glyphosate-based Roundup herbicide can cause non-alcoholic fatty liver disease in rats.

The findings of our study are very worrying as they demonstrate for the first time a causative link between an environmentally relevant level of Roundup consumption over the long-term and a serious disease- namely non-alcoholic fatty liver disease. Our results also suggest that regulators should reconsider the safety evaluation of glyphosate-based herbicides. — Dr. Michael Antoniou

THE CONCLUSION OF DR. ANTONIOU’S PAPER ON GLYPHOSATE
Dr. Antoniou published another paper entitled “Teratogenic Effects of Glyphosate-Based Herbicides: Divergence of Regulatory Decisions from Scientific Evidence” in Environmental & Analytical Toxicology back in 2012. Teratogenic means the ability of an agent to effect the development of the embryo or fetus. Listed below is the conclusion of the paper.

A substantial body of evidence demonstrates that glyphosate and Roundup cause teratogenic effects and other toxic effects on reproduction, as well as genotoxic effects. From an objective scientific standpoint, attempts by industry and government regulatory bodies to dismiss this research are unconvincing and work against the principle that it is the responsibility of industry to prove that its products are safe and not the responsibility of the public to prove that they are unsafe. The precautionary principle would suggest that glyphosate and its commercial formulations should undergo a new risk assessment, taking full account of the entirety of the peer-reviewed scientific literature as well as the industry-sponsored studies. Experience to date suggests that the new risk assessment should be conducted with full public transparency by scientists who are independent of industry.

The California EPA recently won a court battle with Monsanto over its intent to add glyphosate to the list of chemicals known to the state to cause cancer. The current lawsuit brought by plaintiffs with cancer is still pending.