Venice is arguably one of the most beautiful cities in the world. When you walk down its narrow cobblestone streets, you almost can’t believe your eyes. It’s like walking through a painting from another time. It’s a place everyone in the world should experience, and that’s the problem…too many people do.

There’s a kind of silent war raging in Venice right now. And the battle is over tourism—literally “overtourism.”

I’d love to say that Venetians are welcoming, but that wasn’t always my experience. On a recent trip, I was struck by how unfriendly and, at times, rude they were. I was a tourist after all, and tourists are taking over the city, threatening Venice’s authenticity and driving locals away from their homes. It’s almost like Venetians don’t own their city—tourists do.

It can be difficult to appreciate the magnificence of the main tourists attractions, like St. Mark’s Square (Piazza San Marco) and the Rialto Bridge, because of the sheer number of people surrounding them. There are far more selfie sticks in Piazza San Marco than Italians. But there are plenty of pizza slices, even though pizza is not what Venetians eat. (Cicchetti and seafood is more their thing.)

Venice is at risk of becoming the Disneyland of Italy, and it’s not alone. Many popular destination spots around the world, like Dubrovnik (Croatia), Barcelona (Spain), and Bali (Indonesia), are struggling to find solutions to the problems created by overtourism. The situation is so bad in Barcelona, some locals are hanging signs like, “Tourist: Your Luxury Trip, My Daily Misery” and “Tourists Stay At Hotels, The Apartments Are For Living.” Authorities have recently taken action to limit growth.

If we don’t want to end up like Venice, we will have to put some kind of limit in Barcelona—Ada Colau Barcelona’s mayor, The Telegraph

This short documentary helps explain the overtourism problem happening around the world.

LIFE IN VENICE
Thanks to sites like Airbnb, many apartments are taken off the rental market and offered up to tourists for short-term stays. With fewer apartments at higher prices, may locals can’t afford to live in Venice.

One of the Venetians’ primary modes of transportation is the public water bus, or vaporetto, but they are packed full of tourists at almost all hours of the day and night. The city had to establish a “locals first” policy just so residents can squeeze in between the tourists and their luggage.

Walking through Venice in the most tourist-saturated parts of the city is like trying to walk across a football field after a Super Bowl victory: a monumental effort.

But it’s the cruise ships that really get the ire of the locals. The ships, some so large they dwarf the city, are allowed to pass directly in front of St. Mark’s Square. It’s painfully obvious to anyone with eyeballs that this shouldn’t be allowed to happen. But tourism is a big industry, even though some critics warn

large-scale cruising is pushing the city to an environmental tipping point and undermining quality of life for its citizens. — The Guardian

The pollution from the enormous ships threatens the delicate ecosystem of the lagoon that surrounds Venice. The untenable situation has gotten the attention of The United Nations Educational, Scientific, and Cultural Organization (UNESCO). UNESCO has warned Venetian authorities that if they don’t get their act together and protect the lagoon, and deal with the mass tourism problem, Venice might be put on UNESCO’s “List of World Heritage in Danger.” A distinction usually reserved for the world’s most war-torn countries.

That potential embarrassment has forced the city to put a ban on large cruise ships passing in front St. Mark’s Square. But the ban won’t go into effect for four years, a delay that has some locals wondering if they are ever going to see the parade of cruise ships stop.

MORE TOURISTS, MORE RESENTMENT
The never-ending crowds of people flooding into Venice breeds resentment. And I felt that resentment almost everywhere I went in Venice. Venetians will extend no grace period for learning their customs. When I picked up a few pieces of produce at the outdoor Rialto Market (Mercati di Rialto), as I would at any farmers market in the U.S., I was yelled at and shooed away like an unwanted pigeon. Note to self, let them pick up the produce for you.

Many of the “best” restaurants in Venice written about in elite travel magazines and blogs were underwhelming. I dreamt of experiencing that mouthwatering authentic Italian cooking, but in large part, I couldn’t find it.

I wondered if some of these restaurant owners had a secret menu for Italians and another one for tourists. I was served pasta one night that was so al dente it was almost inedible, and pasta sauce I swear was from a jar. Why give the good stuff to the tourists? I imagined them saying. It’s a good question. Why should they give so much of their time, energy, and passion to creating food for an endless army of people that won’t be there longer than a few days?

I’m confident Venetians would graciously give us a window into their lives, if they were given the room to have one.

The stress of living in a city plagued by massive amounts of tourists is driving the bakers, bartenders, and artists out. And when they go, they take the authentic Venetian culture with them. The empty businesses are often replaced with a pizza stands and tourist shops.

Recently, in an effort to “preserve decorum and traditions,” authorities in Venice banned kebab shops and fast food restaurants. The city will also limit the number of establishments selling those pizza slices—a small victory for Venetian culture.

The problem is that with a tourist city like ours, there is a risk of its losing its identity. There are local products that we must try to promote, this would be better for the spirit of the city and, at an environmental level, would be more sustainable.

The threat of Venice losing its identity is real. About one thousand Venetians move out of the city each year. Venetians have been described as panda bears, in danger of becoming extinct.

If the population falls below 40,000, Venice will not be a viable, living city any longer. — Jonathan Keates, chairman Venice in Peril, The Guardian

The problems overtourism creates are obvious, but the solutions aren’t. One Venetian, who had to move out of the city because he couldn’t afford the rent, suggested a steep tax on tourists.

Everyone says this. Everyone comes up with ideas. Do you not think we’ve thought of that? EU freedom of movement rules won’t allow them to charge people to enter the city. The Italian constitution won’t allow that either. We can’t close the city. They can’t increase the “tassa di soggiorno” — overnight tax — either, because those rates are set nationally. Our hands are tied. — Paola Mar, Independent

Mar likens Venice in the summer time to a war, and she is working on ways to deal with the onslaught of tourists. Mar told the Independent the problem is Venice is an “international state.”

If you do something stupid here, you go viral overnight — Paola Mar

How to cope with overtourism is like navigating uncharted waters and one misstep can sting, as Venice’s mayor, Luigi Brugnaro, recently found out.

He erected temporary turnstiles to limit the number of people coming into the city on a busy weekend. Locals were able to pass through the lines with their IDs, but that didn’t seem to temper their outrage, as this headline in the Independent suggests: “Venice locals tear down turnstiles amid fury after they are segregated from tourists because the city is so busy.”

The overtourism problem is putting leaders in the uncomfortable position of balancing the needs of the tourist industry against the needs of furious locals who have begun to hang signs that read: “Tourists Have To Go” and “Tourists go away! You are destroying this area!”

Mar is promoting a new campaign, which she hopes will encourage visitors to discover less populated areas in Venice—and address what seems like “anything goes” bad behavior.

This summer, a couple of Belgian tourists posted a video of themselves jumping off a Venetian bridge into the canal. They later apologized after causing an international uproar. Last August, a tourist jumped from the Rialto Bridge, hit a water taxi, and died. Mar says many tourists think of Venice as a beach and roam around in bathing suits and picnic in front of national monuments.

The new #EnjoyRespectVenezia campaign is an attempt to establish a sort of code of conduct in Venice. There are 12 “golden rules.” A tourist caught violating the rules could get slapped with fines ranging from 25 to 500 Euros. 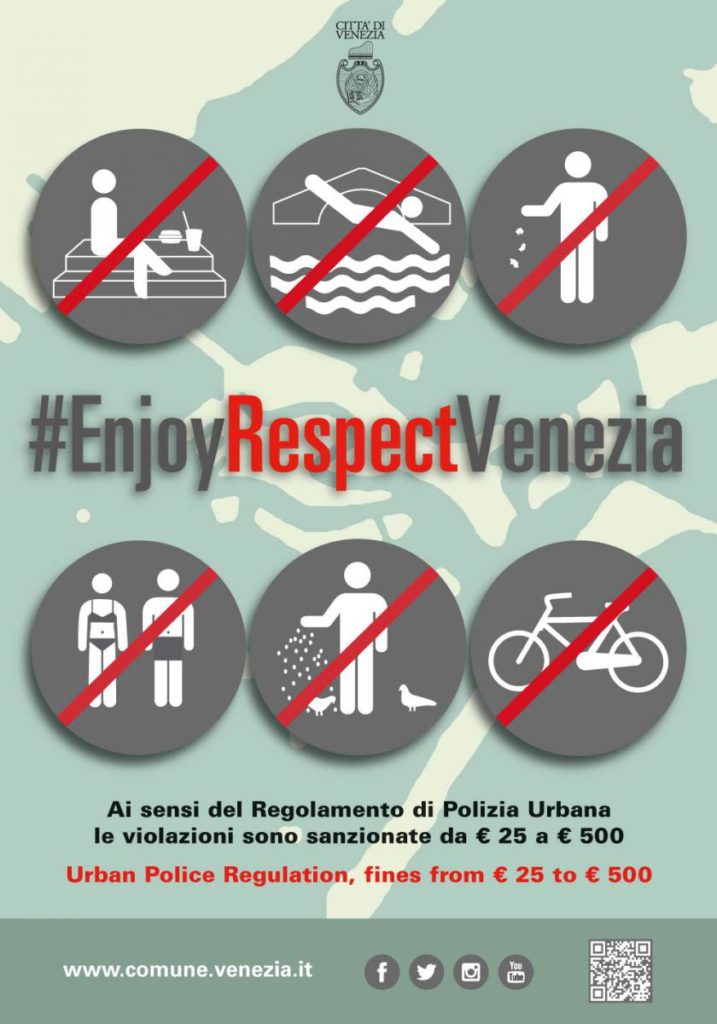 The list of don’ts includes, swimming in the canals, standing on bridges, littering, feeding the birds, and riding bicycles through the city. (How that’s possible in the crowds of summer is beyond me.)

Not every area in Venice is overrun with tourists. There are quiet, almost undiscovered places to stroll. But if Mar’s promotion seeks to draw tourists to those areas, will it help redistribute the concentration of tourists in Venice, or just take away the few places the locals have to breathe? 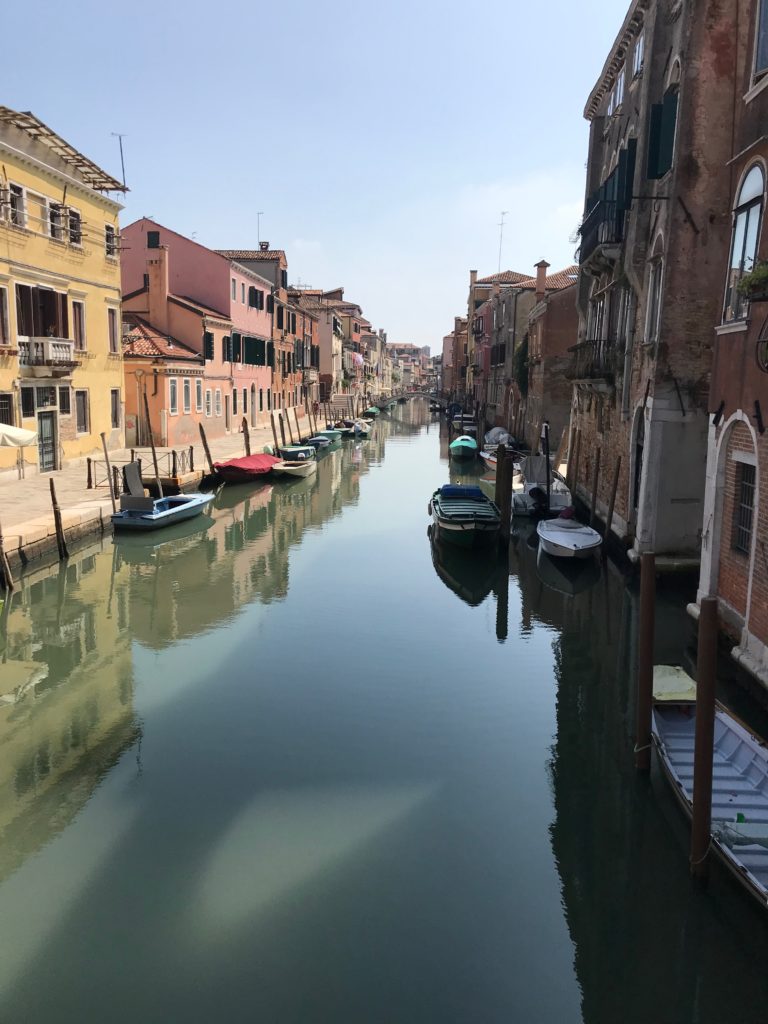 UNESCO has given officials two years to adopt a plan to resolve these issues or Venice may snag the top spot on its “at risk” list— a distinction some reluctantly embrace.

For many, the situation has reached such a critical point that the best option, despite the international embarrassment that it could cause, would be for Venice to be blacklisted so that the city gets under international oversight as a way to ensure its survival. — Forbes

I love Venice. Its beauty is otherworldly. My favorite areas are on the streets less traveled, but I feel almost guilty walking through them with a camera. I want to experience the graciousness of Venice’s residents, but this unrelenting onslaught of tourists is more than they can, and should have to, bear.

If authorities reduce the number of cruise ships that can dock in Venice each week, outlaw short-term rentals, strictly enforce codes of behavior, and somehow convince airlines to reduce the number of cheap flights into Venice each day, or charge more for them, there’s an economic consequence. I guess only Venice and its residents can decide whether it’s worth paying that price.

HOW TO AVOID CROWDS IN VENICE
If you want to avoid the crowds in Venice, do your sightseeing before 10:00 am and after 7:00 pm and plan your trip for the off-season. Mar is right, there are a lot of truly wonderful places in Venice that aren’t anywhere near St. Mark’s Square. Enjoy finding them. Ciao!

Come to St. Barts for the Sea

Is the Most Interesting Thing About St. Barts Its Past?

6 Stunning Hotels For Every Budget in Ubud, Bali

Don’t Book A Flight Before You Read This