The amount of plastic we use is staggering. Humans throw away enough plastic each year to circle the Earth four times. And only nine percent of that plastic gets recycled in the U.S. The rest ends up in landfills or the ocean. Thankfully, there is a global movement working to reduce the amount of plastic we use, especially the kind we use once and throw away (referred to as single-use). If we keep using plastic and throwing it away at current rates, we’re going to seriously jeopardize the health of our oceans.

The tragic consequence of our plastic addiction is that almost 90 percent of the world’s seabirds consume it on a regular basis. And half of the world’s marine mammals have plastic in their guts right now. This year a rare goose-beaked whale found off the coast of Norway had to be euthanized because it had over 30 plastic bags and other plastic waste in its stomach.

One million seabirds and 100,000 marine mammals are killed annually from plastic in our ocean. – EcoWatch

PLASTIC IS HARMFUL TO OUR HEALTH TOO
Bisphenol-A (BPA) is a chemical used to create plastic. BPA is in plastic water bottles, as well as the inside lining of most aluminum cans. BPA is an endocrine disruptor, which means it can interfere with our hormones. BPA has been linked to a litany of health issues, including obesity, diabetes, infertility, cancer, and cognitive/behavioral issues like ADHD.

The nightmare scenario is that we one day find out that a lot more of our current disorders, including infertility and cancer, may be due to Bisphenol-A and only show up after cumulative exposure. But by then, we all have accumulated so much exposure that it’s too late to reverse the effects. – Karin Michels, Harvard T.H Chan School of Public Health

10 THINGS YOU CAN DO TO
AVOID USING PLASTIC

1. THINK BEFORE YOU DRINK
If you want to avoid exposure to BPA and help protect creatures in the sea, ditch the plastic water bottles and drink beverages out of glass, porcelain, or stainless steel containers.

Almost a million plastic bottles are sold every minute around the world. One plastic bottle can take up to 450 years to decompose. – National Geographic

Single-use plastic water bottles are convenient, but those bottles can leach plastic into the water they hold. A recent study found plastic particles in the water of 93 out of every 100 water bottles researchers tested.

Many of these particles “are small enough to be transported through our bodies and end up in our organs,” says Sherri Mason, a chemist at the State University of New York in Fredonia. – Science News for Students

Also try to limit the amount of food you eat from cans lined with plastic and avoid microwaving foods or beverages in plastic containers, as the chemicals can seep out. It’s much safer to hand wash plastic containers, rather than exposing them to high heat in the dishwasher. 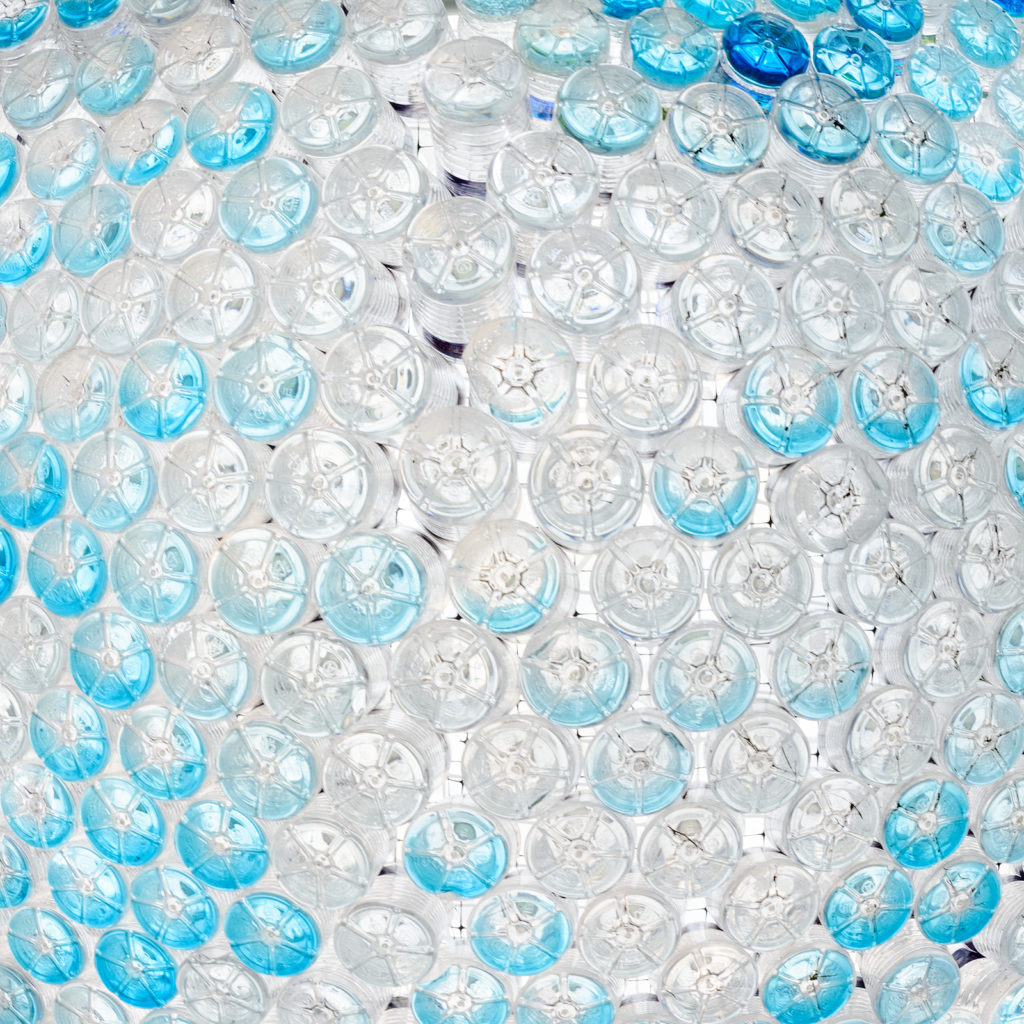 2. USE REUSABLE BAGS
Rather than rely on plastic bags you’ll only use once, take reusable bags with you to the grocery store, farmers market, or anywhere you might need a bag. You can find a bunch of reusable bag ideas here.

Shoppers in the U.S. use almost one plastic bag per resident per day. Shoppers in Denmark use an average of four plastic bags a year. – National Geographic

We are setting the trend for the rest of the country to follow. – SF Board President London Breed

The UK’s Prime Minister Theresa May was one step ahead of SF when she called for a nationwide ban on single-use plastic last month. She wants cotton buds, plastic drinking straws, and other single-use plastics banned by next year.

If you want to do your part, there are plenty of ways to slurp down your margarita without using a plastic straw. MeriMeri makes paper party straws, Crate & Barrel sells stylish stainless steel straws, and CB2 offers sleek glass straws.

4. USE GLASS FOOD STORAGE CONTAINERS
Glass containers are see-through, easy to clean (ever tried to clean spaghetti sauce off a plastic tub?) and microwave safe. This set is reasonably priced and comes with BPA-free plastic lids. 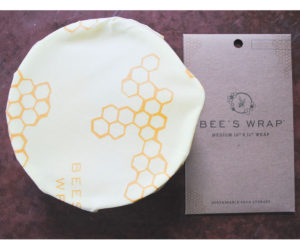 5. WRAP IT, BUT NOT IN PLASTIC
Exchange plastic wrap for alternative wraps, like Abeego or Bee’s Wrap. These wraps are made from all natural beeswax.

6. PICK IT UP & DON’T LITTER
Most plastic litter enters the world’s oceans from rivers and sewers. If you see plastic trash, especially near bodies of water, pick it up and throw it away. Get some of your friends and neighbors together and organize a weekly or monthly trash cleanup day in your community.

7. WEAR NATURAL FIBERS
When washed, synthetic fabrics like polyester and acrylic release small microfibers that look like fuzz. One load of laundry can release more than 700,000 microplastic fibers. The fibers get washed down the drain and end up at wastewater treatment plants. Most plants don’t have filters small enough to catch these micofibers, so they end up in the ocean. To avoid contributing to the problem, buy clothes made from natural fibers, like 100% organic cotton. 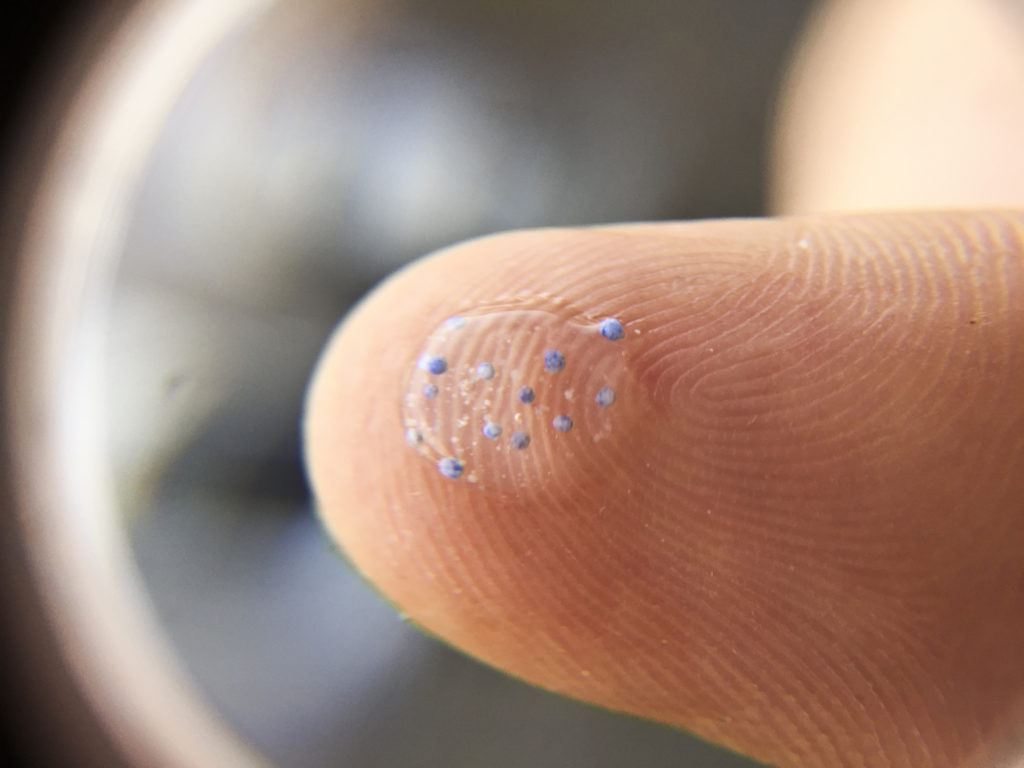 Microbeads are tiny granules of plastic added to toothpastes, facial scrubs, and cosmetics. When flushed down the drain, they end up in the ocean.

Microbeads cannot be completely filtered out by [preliminary] wastewater treatment. Once in the ocean, they do not decompose easily … and before you know it, they end up in our dinner – Kate Lin Pui-yin, senior campaigner at Greenpeace, Health & Environment

How do plastic microbeads end up on our dinner table? Fish confuse microbeads for food and swallow them. The toxins they ingest then bioaccumulate in their tissue. Toxic plastic has been found in the stomachs of mackerel, striped bass, Pacific oysters, mussels, and lobsters.

In one study, 1 in 4 fish that researchers purchased from fish markets in Indonesia and the United States during the second half of 2014 were found to have plastic in their guts. – Huffington Post

Sherri Mason, a professor at the State University of New York at Fredonia, led a study that found plastic in sea salt. Mason says plastic is “ubiquitous in the air, water, the seafood we eat, the beer we drink, the salt we use—plastics are just everywhere.” – EcoWatch

9. ALL THAT GLITTER IS NOT GOLD 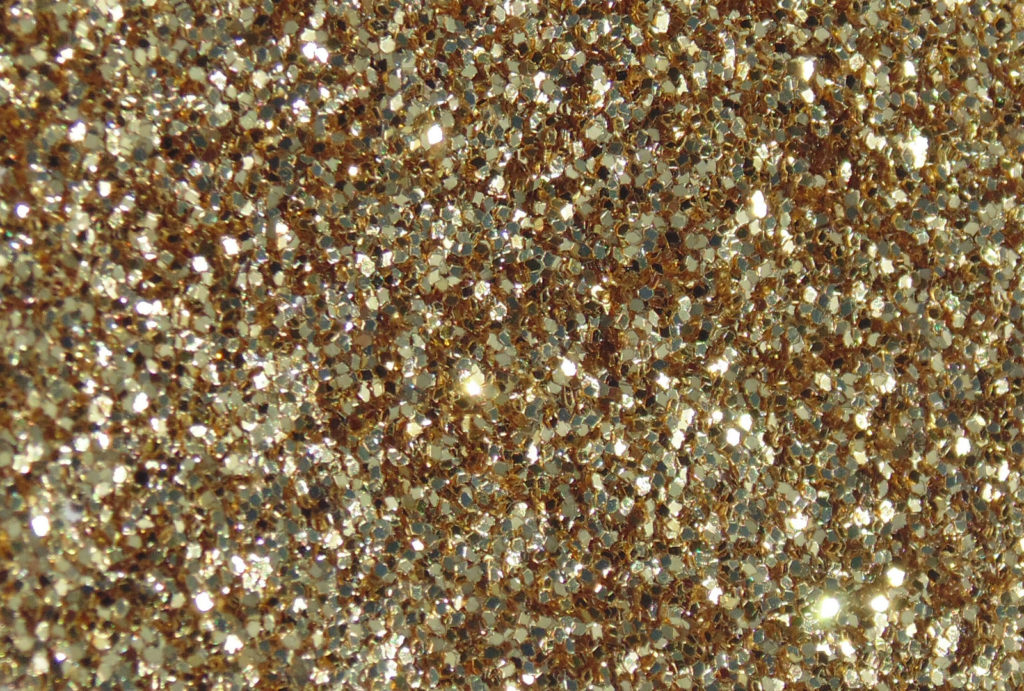 Glitter is a microplastic, or a tiny piece of plastic less than five millimeters in size. When glitter makes its way into oceans and great lakes, it gets eaten by marine life. The toxins in microplastic can cause all kinds of developmental, reproductive, neurological, and immune effects in fish. Studies have shown that the endocrine disrupting chemical in microplastic could be responsible for freshwater fish population collapses.

10. SPEAK UP
If you see something needlessly packaged in plastic, speak up!

Around 40 percent of all plastic produced is used as packaging we use once and throw away. – National Geographic

Ask the manufacturer or retailer if they can use more eco-friendly packaging. If enough people speak up, change will happen. (Read about how Trader Joes just switched to compostable plastic bags for their customers.)

Start to pay attention to how much plastic you use and seek out healthier alternatives for the benefit of yourself and the environment. If all of us do, we can keep our bodies healthy and the creatures in the sea protected from our plastic pollution.

LEARN MORE
If you’re looking for more ways to rid your life of plastic, read My Plastic Free Life’s “100 Steps to a Plastic-Free Life.”
National Geographic – “Fast Facts About Plastic Pollution”
EcoWatch – “22 Facts about Plastic Pollution (And 10 Things We Can Do About It)”
SF Examiner – “Straw ban is fantastic but SF should think bigger and bolder”
The Guardian – “Cotton buds and plastic straws could be banned in England next year”
Scientific American – “BPA Still Widely Used in Canned Goods”
Scientific American – “Undergoing Fertility Treatment? Watch Your Plastics”
NPR – “Millions of Pieces of Plastic Are Piling Up On An Otherwise Pristine Pacific Island”
The New York Times –“A Remote Pacific Awash in Tons of Trash”
Quartz – “Removing plastics from the oceans is “not environmentalism, it’s good business”
Huffington Post – “The Oceans Are Drowning In Plastic – And No One’s Paying Attention”
Huffington Post – “Beached Whale Found With 30 Plastic Bags Crammed In Its Belly”
One Green Planet – “This Colorful Ball is Helping Keep Millions of Plastic Microfibers (From Our Clothes) Out of the Ocean”
The Guardian –“Will clothes companies do the right thing to reduce microfiber pollution?”
The Washington Post – “We’re Now at a Million Plastic Bottles Per Minute – 91% of Which Are Not Recycled”
The Washington Post – “The bad news is that fish are eating lots of plastic. Even worse, they may like it.”
Newsweek – “BPA is Fine, If You Ignore Most Studies About It”
Huffington Post – “Beached Whale Found With 30 Plastic Bags Crammed In Its Belly”
The New York Times – “Facing Consumer Pressure, Companies Start to Seek Safer Alternatives to BPA”