I have a thing about people having cell phone conversations in public. I hate it. Now, I’ll admit I’m not really a people person, and a lot of things people do annoy me, but I live in LA, so that kinda goes with the territory. I like the people I like. Others, I tolerate like everyone else.

But something we shouldn’t have to tolerate is annoying public cell phone conversations, especially as captive prisoners in an already trying situation.

Take my recent flight, for example. I had just flown nine hours from Venice, Italy (I do not expect sympathy), had a two-hour layover in Newark, New Jersey and was on aboard another plane for a five-hour flight back to LA.

Funny side note, as I was boarding the plane in Venice, arguably the most beautiful city on Earth, the Italian flight attendant said in a fake Jersey accent, “All aboard for Newark, New Jersey. Who doesn’t want to go to Newark?” I really appreciate flight attendant humor, even if it’s bad.

I sat, buckled into my seat, watching the parade of passengers walk down the aisle when in walked a Kim Kardashian disciple. You know, the ones who are completely oblivious to the people around them and think they are starring in their own reality show.

Now, I’ve heard people on cell phones on planes before and those conversations usually go something like this, “We’re about to take off. I love you.” I can deal with that, I guess. It sometimes makes me feel like we’re all about to die, but that’s another story. I’m an anxious flyer.

But this conversation was different. A twenty-something girl sauntered down the aisle with her iPhone in hand, saying:

FYI, I’m not embellishing the likes. This ten-second sentence, took about thirty to complete.

It reminded me of a conversation a college student might have while puking into their friend’s toilet, but thanks to modern technology, we all get to hear about it. It was just like being at a slumber party, but on a plane with a bunch of strangers.

Of course her conservation was in full voice because otherwise how could all her adoring fans in the back hear her? At one point, she asked for the flight attendant to hand over the PA (or maybe I made that part up).

Anyway, her ability to tune out all the people around her was kind of impressive, in a sort of what’s-happening-to-civil-society kind of way.

And if shouting the details of a very personal conversation down the aisle of an over stuffed airplane didn’t take a big enough set, she was on speakerphone, too. No, I did not want to listen to her friend’s reply, but where was I going to go?

So in my head, I made a new rule. If you’re going to have a cell phone conversation on an airplane, you have to sit on the wing until just after takeoff. If you’re still there once we hit 30,000 feet, you can come back in, but not through the window or door because you’ll jeopardize the other passengers’ safety. You can “phone a friend”on speakerphone to figure out how.

I can’t believe I have to say this, but if you want to have a conversation about your boyfriend, there’s a place for that. It’s in your living room, not the middle of a packed airplane. I think I can speak for every citizen in the United States of America when I say you are annoying the hell out of everyone around you.

Note to self, get a HEADSET.

HERE’S THE PROBLEM
We can’t say anything. I’m usually resigned to flashing a look, but in my experience, they have no idea why you’re looking at them.

I find it a bit ironic that confronting someone on a cell phone about their bad behavior is considered rude. And a person who’s unaware enough to have a full-on conversation in public obviously doesn’t care what we think about it anyway. Also, I figure, if they don’t mind being the center of attention in the most rude way possible, they probably wouldn’t think twice about making a scene if you say something to them, and no one wants drama. We just want the conversation to stop so we can get back to engaging in our own lives IN PRIVATE.

HERE’S THE SIMPLE SOLUTION
If all establishments, public and private, put “no cell phone” signs up and enforced them, the problem would be solved. It’s that simple. It sends a clear message: we no longer tolerate this behavior. It’s a very reasonable and fair way to handle the situation.

The sign can be polite or straight to the point, like this one available from FrockGraphicDesign on Esty. 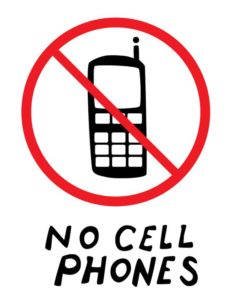 As a courtesy to others
No Cell Phone Use
If you need to take a call, please step outside
(especially on a plane)

The sign can be funny. This spoof on Jay-Z’s “99 Problems” is my favorite. It’s available on Zazzle. 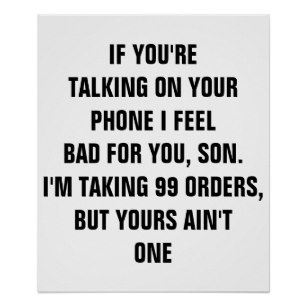 This one from Humor Meet Comics makes the point. 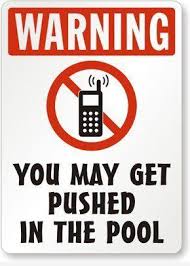 This one found on Etsy is great for a wedding. 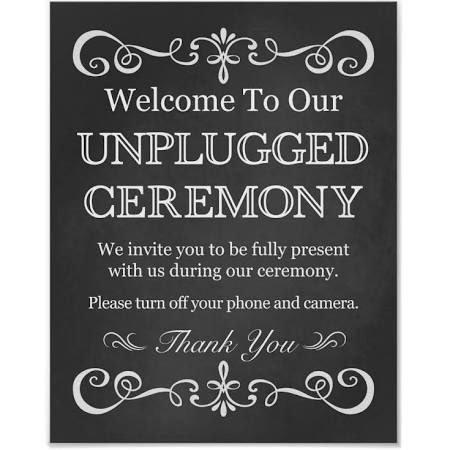 But you can customize it for anything.

Why is this story on a blog devoted to health?
That’s an easy question to answer. Listening to someone’s obnoxious cell phone conversation is irritating, and according to CNN, “taming your anger can have important benefits to your health.”

Feature image of girl looking at her phone courtesy of Slphotography @iStock.